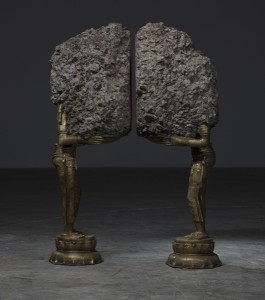 Nature Morte is pleased to present an exhibition of new sculptures by L.N. Tallur. The title ironically situates the artist’s practice within the intersections of desire, value, pedigree and psychology. Known for his kinetic sculptures which often comment on society and politics, the work of L.N. Tallur combines a sharp wit along with a prodigious use of materials.

Many of the works in the exhibition use the classical sculpture of India as their starting points. These “found objects” are then combined and manipulated, confounding the established categorizations with which we usually interpret art: figuration and abstraction, traditional and contemporary, decorative and functional, creative and destructive, religious and secular. It is as if each work is both and neither at the same time. Tallur’s works may appear quintessentially “Indian” at first, but they certainly participate in the most advanced dialogues surrounding sculpture today and reveal themselves to be both cosmopolitan and historically astute.

L.N. Tallur was born in 1971 in the south Indian state of Karnataka. He received a BFA degree in painting from the Chamarajendra Academy of Visual Arts in Mysore in 1996, an MFA degree in museology from the MS University in Baroda in 1998, and an MA in Fine Art from the Metropolitan University in Leeds, UK, in 2002. Solo shows of his works have been mounted at Arario Gallery, Beijing (2010); Chemould Prescott Road, Mumbai (2009); Arario Gallery, New York (2008); Arario Gallery, Seoul (2007); Bose Pacia, New York (2000); and Chemould Gallery, Mumbai (1999). In addition to receiving the Sanskriti Award from the Sanskriti Foundation of New Delhi in 2003 and having his works included in many group exhibitions around the world, Tallur’s large-scale installation entitled “Souvenir Maker” was recently exhibited at the Devi Foundation in Gurgaon and the Museum of Contemporary Art in Singapore. The artist currently divides his time between India and South Korea.

On the following page are two texts supplied by the artist to function as sardonic explanations for his works and the exhibition.

Nature Morte is open Monday through Saturday, from 10am to 6pm and closed on Sundays. For more information and press photographs, contact Geeta Bajaj at (011) 4174-0215 or visit our website at www.naturemorte.com.

Etiology
Chromatophobia is an abnormal and persistent fear of money. Sufferers experience undue anxiety even though they realize their fear is irrational. They worry that they might mismanage money or that money might live up to its reputation as “the root of all evil.”

Diagnosis
Turbulence is a state where rhythm is lost. A seed sown with a wish for “momentum” grew up into a greed for “speed”. A speed that has never been seen before brought excitement!, Enjoyment!! And finally, a fear about the very speed we opted for!!! The result: Chromatophobia – Fear of Money.

Prognosis
Treating Chromatophobia involves an invasive procedure that involves “bringing the rhythm back”, while maintaining the vitals in a stable condition under local anesthesia. Time is a crucial factor in bringing the rhythm back. The “process of ageing” that involves “time” is the only prescription that can control the speed and bring the lost rhythm back. This may involve some minor side effects like “survival of the fittest”.

An e- folktale: A Solution to the Global Economic Crisis

In a small town on the southern coast of France, the holiday season was in full swing, but due to rain business was slow and the people were in debt.
Luckily, a rich Russian tourist arrived in the foyer of a small local hotel. He asked for a room and gave a €100 note to the man at the reception counter. He asked the hotel owner if he could see the room before occupying it. The owner agreed and gave him the key to the room. The Russian guest took the key and went to inspect the room located on the third floor of the hotel.

In a hurry, the hotel owner took the banknote and rushed to his meat supplier, to whom he owed €100. The butcher took the money and raced to his supplier to pay his debt. The wholesaler rushed to the farmer to pay €100 for pigs he purchased some time ago. The farmer then triumphantly gave the €100 note to a local prostitute, who gave him her services on credit. The prostitute quickly went to the hotel, to pay for the room she occupied earlier to render her services.

At that moment, the rich Russian tourist came down to the reception and informed the hotel owner that the room was unsatisfactory and took his €100 back and departed. So here is a debt free town, whose future looks “as shiny as a polished coin…”